It’s the day after an exciting show out at the Abottsford Tradex.  Met a lot of fabulous and interesting people, the Motorcygalz, a dynamic trio (one was missing) from Kelowna, check them out on their website.  Ran into a trainer I used to work with, Josh Dirnfield and bought my Joe Rocket cycle jacket, he has his own business, Rubber Side Down, in Richmond.  Logged an awful lot of steps around that venue for four days.

Had fabulous meals at fine restaurants three nights in a row, but managed to lose four pounds.  So what’s the fitness point of this blog?   Mostly mental.  Last year at the show I decided to take motorcycle lessons and get my license.  I’ve done that, and now have picked out my bike at this show and will  buy it.  I chose a goal and pursued it.  This makes me feel really good.  I didn’t formally exercise for four days.

Periodically I took a full body stretch (a modified down dog with my hands on the counter), a few calf raises once and a while, calf stretch, quad stretch.  Because I was standing and walking 90% of the time, this was a great release for my spine, back  and leg muscles.  And, because I exceeded my 10,000 steps a day, I was active enough without doing formal “cardio”.  This makes me feel good.

Are you doing things that make you feel good?  Your mind sort of sets the stage for you each day.

If you don’t like the setting, change it a bit.

What’s on My Plate Tonight

Published by Denise under Daily Tip,Fit Tips,General,What's on My Plate 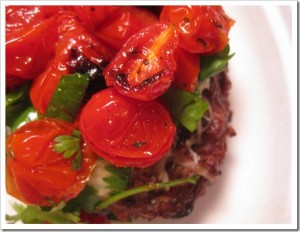 A client called me while I was getting dinner out tonite.  Of course he wanted to know what “I” would be eating.

Truthfully I recited the menu of hamburger, and french fries (made in the oven of course with a smattering of olive oil).

He was shocked that “I” would have such a dinner.

Obviously I haven’t been a good enough coach in the dietary department, because we can all eat most foods and not become unhealthy or overweight as long as we “manage” our diet like we do the rest of our lives.

Having seen a “roll” encroaching on my waistband today, I decided not to have a bagel(the hamburger bun of choice out of the freezer, which happened to be white, and void of nutritional value, and loaded with simple carbs-hence sugar), which would enhance “my” roll.

So, I had a bunless burger – did not miss it one bit, had all my usual condiments, mustard, relish,  and vinegar with the home made fries, felt no guilt, and know it was a righteous act in the dietary department for the day.  ……

Moral of the story, little things add up to little changes.  Brings your awareness to the value of the bun.

Below are a couple of recipes you might want to try, the last one is not something you would eat everyday but every once inn awhile, in moderation, enjoy! 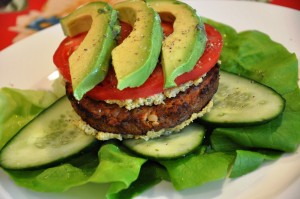 Heres what you need:

Comments Off on What’s on My Plate Tonight